These Portraits by African Photographers Reveal the Power In Self-Presentation

We take a tour through the International Center for Photography’s “Your Mirror: Portraits from the ICP Collection”, which features influential works from Malick Sidibé, Zanele Muholi, Samuel Fosso and more.

The eyes of the young woman in Zanele Muholi’s “Anele, ‘Anza’ Khaba,” look as if they’re staring directly into your soul. With her arms folded against her chest, it seems she might be putting a guard up or that they might simply be trying to look cool for the camera. With portraiture especially, how far you decide to read into something is up to you, as often, the line between a subject’s desire for self-presentation and what the photographer themselves seeks to convey, isn’t always clear. These are the types of observations that the “Your Mirror: Portraits from the ICP Collection”, sparked in my mind as I strolled through the space with its Director of Exhibitions and Collections, Erin Barnett.

“You learn a lot about yourself and about other people by looking at portraits, but not always what you think you know,” she says. We also learn a lot about the person behind the lens. The ICP’s exhibit features works from photographers from across the globe, with the mission of surveying “the nuanced ways people present themselves for the camera, how and by whom they are represented, and who is deemed worthy of commemoration.” The works of four prominent African photographers are included in the exhibition: the Malian icon Malick Sidibé, Cameroon’s Samuel Fosso, along with South African photographers Zanele Muholi, and Lolo Veleko. Their photographs, the settings, and who they choose to document, give us a glimpse into their vision as much as it does the subjects in their photographs (which for Samuel Fosso, in this case, is himself.) 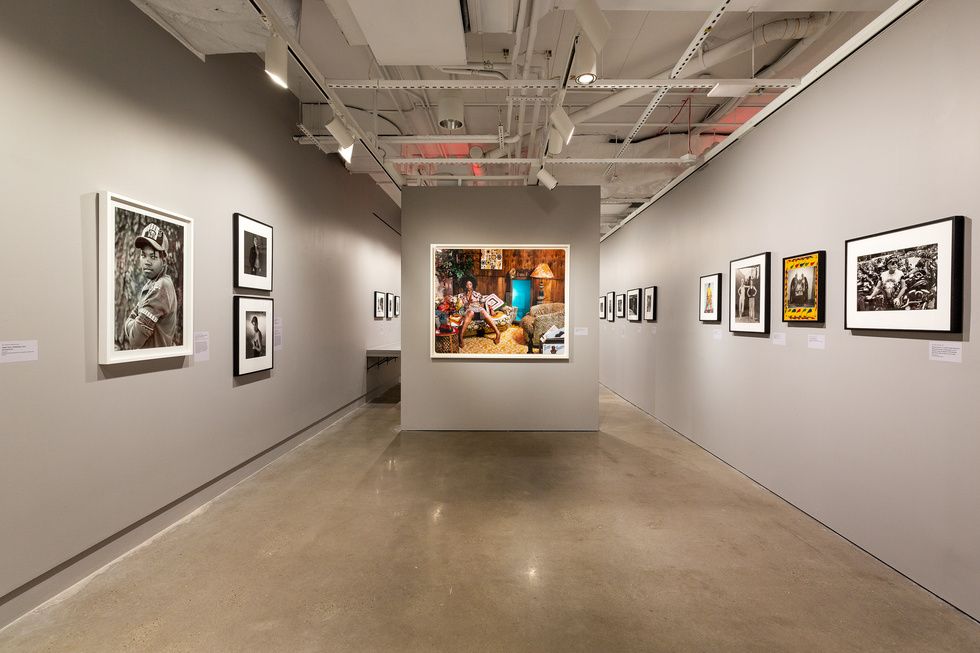 Image courtesy of the ICP.

At its essence, “Your Mirror” explores some of the pressing questions at the heart of photography, which have even larger implications as they relate to the representation of Africans. “Looking at the power dynamic between the photographer and the subject,” says Barnett. “[We wanted to understand] what do we as contemporary viewers take from the relationship? What do we put onto it? That’s the concept of the whole show.”

The exhibit was sourced from the ICP’s collection of over 200,000 images and includes images grouped into nine categories: family, labor, war, social change, self presentation, identification, celebrity, self-portraiture, and appropriation. Many of the works of African artists fall under the “self-presentation” section, which, to me, makes perfect sense in the context of the Black experience & our ongoing quest for authentic representation. 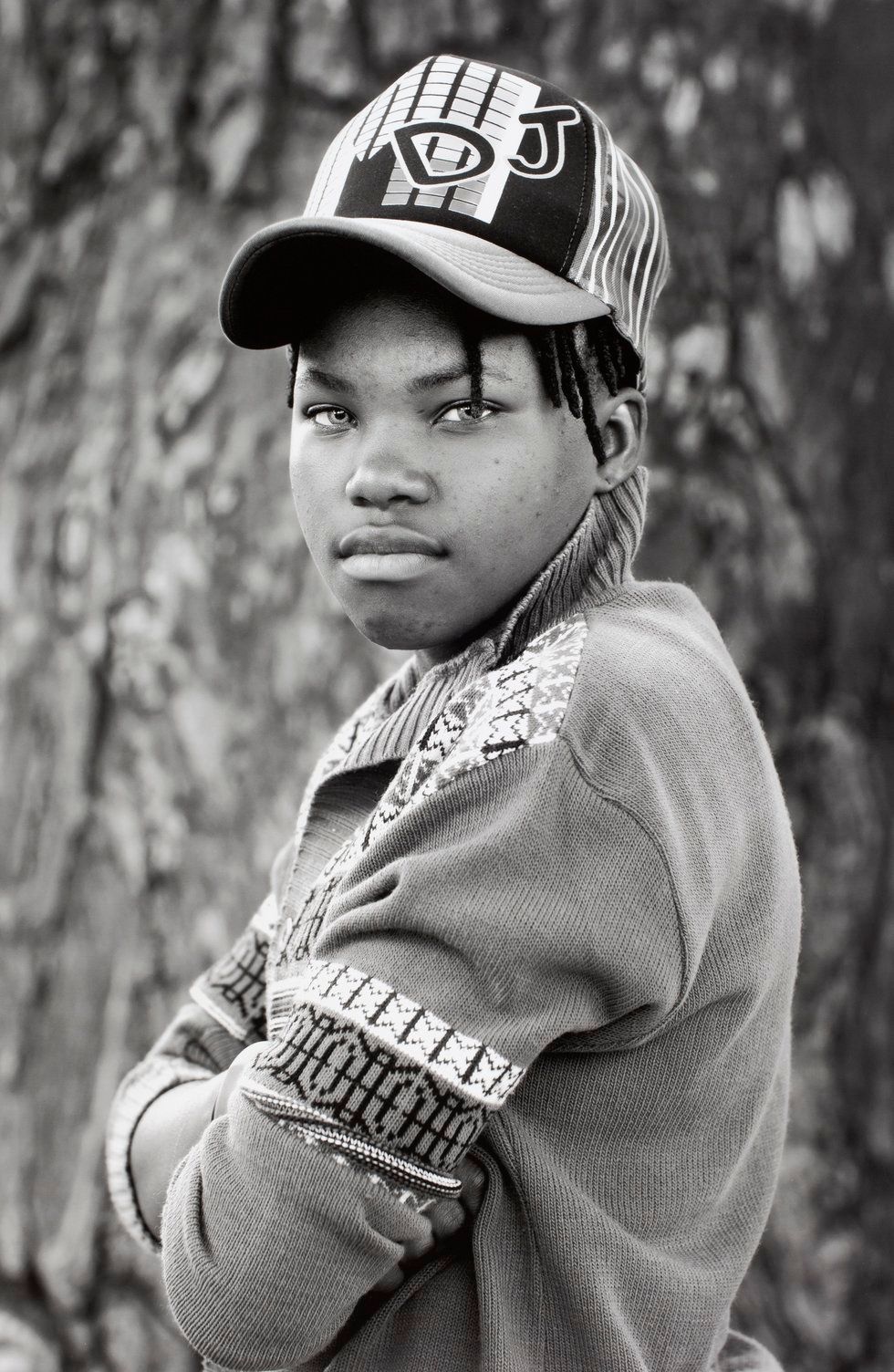 While roaming the interior of the softly-lit space, we walked past several iconic images that graced the exhibit’s family and labor section, like Marc Riboud’s “Young Woman Holding a Flower” a famous anti-war image taken during the Vietnam War, as well as the harrowing “Scourged Back” of the African American soldier, Gordon who escaped slavery in 1863, before reaching the work of the South African artist and visual activist Zanele Muholi, which is placed fittingly in the “self-representation” section. Muholi’s images, shot mostly in black and white, center on community building within the LGBTQ community and examine what it means to be queer in South Africa.

“Muholi considers themselves a visual activist and imagines doing this project for the rest of their life,” Barnett tells me.

Their photos focus on “showing people the way they want to be seen,” says Barnett. She notes that the striking look in the subject’s eyes illustrates this immense desire.”I love this because, just look at those piercing eyes, and that idea of just saying ‘I am looking at you and I do not care what you think of me, but here I am and this is me. You deal with that. I don’t have to deal with it.’ I think it is a really amazing picture.”

Lolo Veleko’s “Nonkululeko” from the series “Beauty Is in the Eye of the Beholder,” hangs close by and features a stylish young woman posing confidently in her best streetwear, giving off a quintessential city attitude.

Her pose, and obvious concern for how she looks, reminds me of my sister during her teenage angst phase. 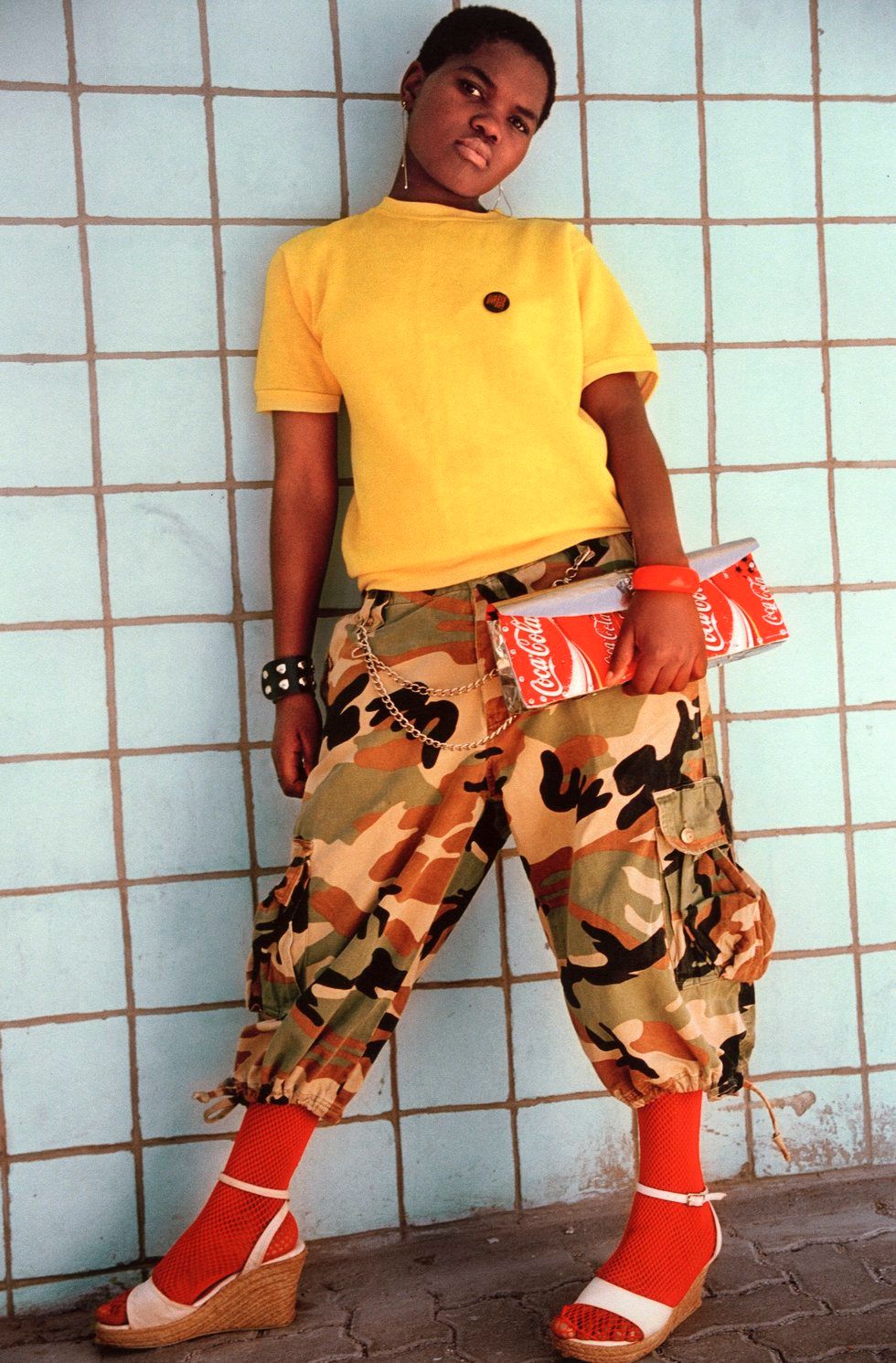 “She is interested in youth culture and urban culture,” says Barnett of Veleko’s work. “So she went around Johannesburg and just found people in amazing outfits and took pictures of them. Each image from the series features young people in unique streetwear. All of them look like they could be in fashion shoots.”

She points out that the cool and assertive energy that the young woman in the photo gives off, noting that it’s one that feels familiar to anyone who lives in large urban metropolis like Lagos, London or NYC. “All of the people in the pictures have a fantastic attitude. A city attitude, and I feel like is very easy, especially in New York, to identify with.” 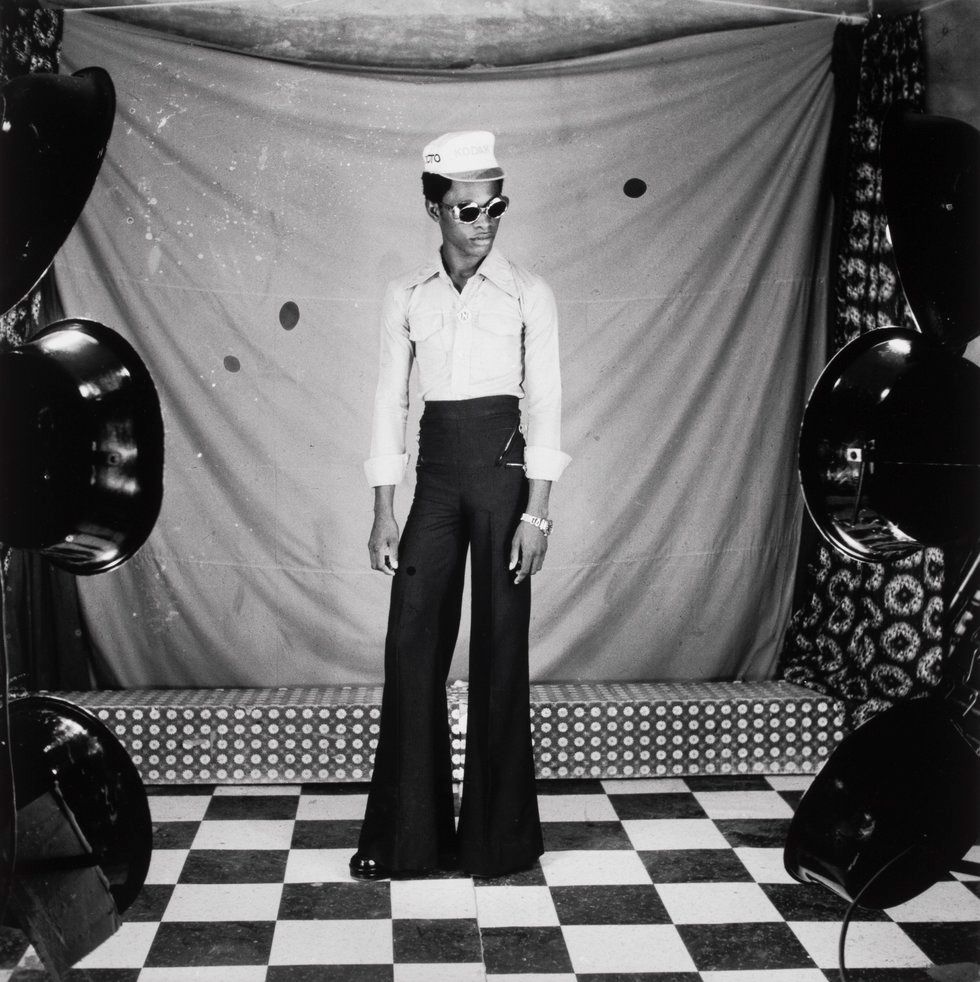 The work of Samuel Fosso, who won an ICP infinity Award last year, appears next. The renowned Cameroonian photographer (who grew up in Nigeria and fled for CAR during the Civil War) was just 13 when he opened his own photography studio. He shot this self-portrait at the age of 15, using the ends of the rolls of film that he had used to shoot customers throughout the day. I observe the image for a moment and admire that he was just 15 in the picture, yet obviously in full command of his work. He looks knowingly stylish and confident in the picture. Barnett shares a tidbit about how the artist started sending the self-portraits to his doting grandma and much later began selling them.

Fosso’s work, is the most obvious example of self-presentation in the collection, made clear not only by the fact that it’s a self-portrait but also by its setup and delivery. In his dark sunglasses, a pressed button-up shirt and bell-bottoms, it feels like Fosso is showing us the version of himself that he wants us to see: the cool, composed and fashionable one. In the 21st century, many can identify with wanting to look this way in front of a camera, except now, most of our modern-day self-portraits live on Instagram in the form of selfies.

This proves that while the channels for self-presentation may have transformed, the inert desire to be in control of how others see us, has not.

“He’s been taking self-portraits for years and years and years, so you see the way he plays with his own identity, but also with West African fashion,” says Barnett. “Also, I love that he’s not trying to gussy up the fact that he is a working photographer. He is also playing with tons and tons of different identities.” 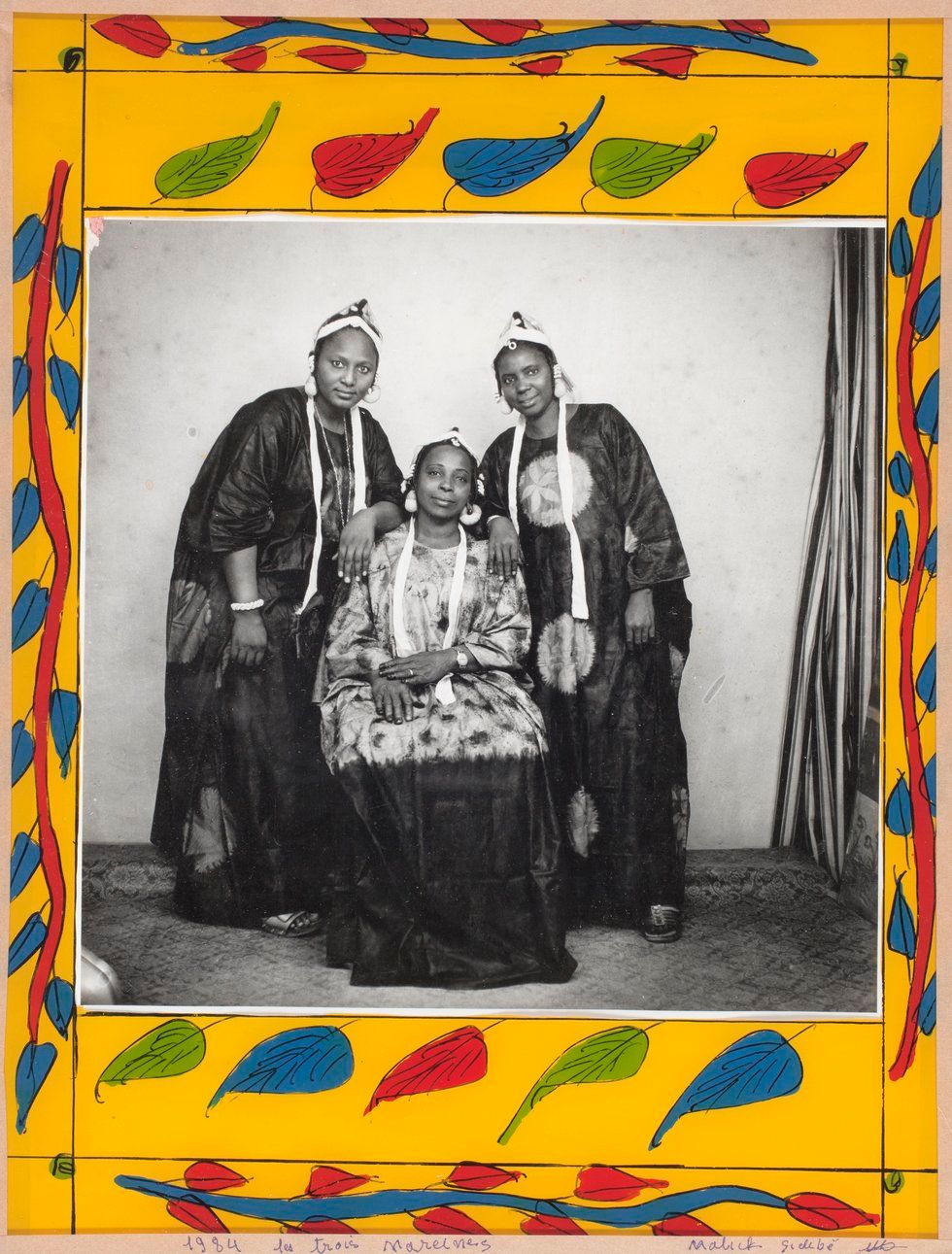 The work of Malick Sidibé immediately jumps out in the muted, space. The legendary Malian photographer, also the winner of an Infinity Lifetime Achievement Award from the ICP, has one of the most well-known catalogs of any African photographer, often capturing both candid and staged black-and-white images of Africans in celebratory moments throughout the mid-20th century.

In this piece, entitled, “Les Trois Mareines,” which Sidibé adorned with a colorful, floral frame which he hand-painted himself, we see a prime example of the comfortable, familial love often present in his work. “The women seem to be godmothers, but almost in a fairy godmother sense,” Barnett explains. “I feel like there is something about the power in this group of women. There is clearly a relationship there.”

The woman sitting in the middle commands respect and strikes me as the archetypal matriarch that’s a part of every African family. The woman who provides everything from recipes to words of wisdom.

Sidibé saw his photographs as a means of documenting meaningful human connection. The images capture the feeling of pride that come when people are given agency over how they present themselves to the world. According to Barnett, the artist was simple aiming “to capture that very moment when people are at their best,” and with “Les Trois Mareines,” that vision is clear.

The Your Mirror: Portraits from the ICP Collection will be on display at the ICP Museum in New York City until June 16.